Proto-Slavic inflectional morphology was part of the Roots of Europe project funded by the University of Copenhagen from 2008 to 2013.

One of the results of the project was a habilitation thesis, Proto-Slavic inflectional morphology , which was defended at the Faculty of Humanities, University of Copenhagen, on 9 October 2015 . The defence was livestreamed by the Faculty and is available as a podcast .

On the basis of the thesis, a monograph was published ( publisher's homepage for the book ; Google books ; flyer ): 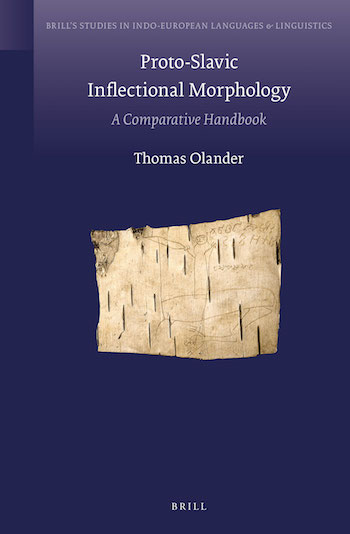 Proto-Slavic is the last stage of the language from which all Slavic languages descend. Together with the Baltic languages, Slavic constitutes the Balto-Slavic branch of the Indo-European language family, which also includes branches like Anatolian, Indo-Iranian, Greek, Italic and Germanic.

Proto-Slavic, like Proto-Balto-Slavic and Proto-Indo-European, is not attested itself but reconstructed through historical-comparative linguistic analysis. Proto-Slavic is primarily reconstructed backwards in time, on the basis of the attested Slavic languages. A comparison with the evidence from Baltic and the other Indo-European languages also leads to a secondary reconstruction process forward in time. In terms of absolute chronology, the Slavic languages are attested from around 1000 AD onwards. Proto-Slavic was probably spoken around 600 AD, Proto-Balto-Slavic perhaps around 2000–1000 BC, and Proto-Indo-European around 3500 BC.

The study differs from almost all other systematic treatments of the Proto-Slavic inflectional system by taking its point of departure in Proto-Slavic proper as it was spoken around 600 AD, not in Common Slavic which includes many later changes common to most or all Slavic dialects. Because of the massive phonological developments that took place in the transition between Proto-Slavic and Common Slavic, the change of perspective undertaken in this study leads to several new analyses of the material. Moreover, unlike other studies with a similar scope, this study takes into account the evidence from the birch bark letters that have been excavated in the Novgorod area from around 1950.